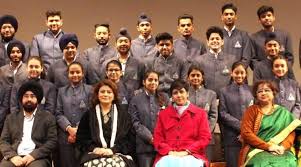 The chief guest was former Lieutenant Governor of Andaman and Nicobar Islands, Lt General Ajay Kumar Singh PVSM, AVSM, SM, VSM (retd). Parents also graced the occasion. Principal Vandana Chawla welcomed the chief guest and personally read out citations of each Class 12 student. General Singh presented proficiency certificates to the students. The prestigious Valedictorian of the Year and Rachit Jain Award were also announced. Ananya Aneja, the outgoing head girl, was declared the Valedictorian of the Year for her consistent performance. Rishabh Vashist won the Rachit Jain Award for excelling in academics as well as co-curricular activities. In his address, General Singh highlighted the role played by the Indian Army in protecting the country and ensuring peace. He encouraged the students to follow their dreams and be willing to take risks. His speech mixed with personal anecdotes inspired the students. Vandana Chawla thanked General Singh. She encouraged students to work hard in life and follow their passion with conviction. She emphasised on the role played by teachers in shaping society and expressed her desire to see students take up the noble profession. The candle lighting ceremony, a symbolic gesture of passing on the baton of responsibilities by the outgoing student council to the new student council, concluded the event.